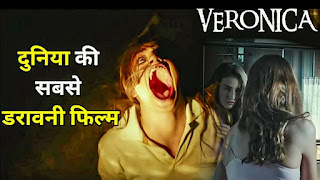 The movie’s main character was 15 years old girl named Veronica. In the year 1991, she lived in Madrid with her mother and siblings. His father was dead before a time. Her mother used to work day and night in a club to run her house. Veronica had to take care of her siblings due to these circumstances.

Rather she is planning something with friend Rosa. At one side, all students are moving upstairs to view the solar eclipse. While Veronica goes in the school basement with her friends Rosa and Diana. Where they were going to conduct a seance. . They wanted to contact with the spirit of anyone through spirit board. Diana yearned to call her friend’s spirit who was dead before a month in an accident. And Veronica wanted to call her father’s spirit. First of all, they place Veronica’s father photo in front of spirit board. And they attempt to contact with his spirit.

Three girls place the hand on a glass cup and also gets the immediate response. That glass cup begins to move on the response of spirits. And that glass cup is too hot that Rosa and Diana pull their fingers back. Veronica was only one who was accomplishing this seance. That glass cup is broken at the time of solar eclipse. Veronica’s finger is injured and bleeds because of the broken glass cup. This blood is dripped on the spirit board. Veronica is silent like a dummy and that spirit board is divided into two parts breaking. Meanwhile, the unusual activities are started in the basement. And Diana starts screaming. Veronica whispers of words lying down on the ground. And suddenly she shouts in Satanic voice losing her senses. Then we are shown that Veronica is in the ward of her school’s hospital. She is being checked by a doctor.

Doctor thinks that the reason of her unconsciousness is the iron deficiency. And she should be careful on her food. And when she is returning to house with her siblings, Then she observes a school resident nun who is continuously starring at Veronica. People used to call this nun death. And above all , this nun was blind.

Now the question is aroused that how was she starring at Veronica. Different things happen with Veronica even reaching at house. She is frozen at the dinner time. Moreover, the claws’ mark starts to appear on her body. While bathing her brother Antonita, then she hears some sounds from her room. And she is locked in that room pursuing these sounds.

And she hears her brother Antonito’s voice in that locked room. Anyhow,  coming from the room, she moves into lavatory where Antonito is shouting sitting in the bathtub. Someone had opened the hot pipe valve as a result Antonito’s body was burnt. Then Veronica immediately brings Antonito out the bathtub and uses ointment for burnt body. At the same night, Veronica dreams of her father who is calling her. Then Veronica is pulled by the many appeared hands. Veronica’s father was also turned into a black ghost. And he orders to attack on her. After that Veronica is awakened. She finds everything normal. Veronica goes to school in coming day but her friend Rosa is ignoring her. After being upset, she moves to basement and meets nun death.

Nun death informs her that Veronica has committed a blunder calling the ghost spirits. While doing it, her father’s spirit did not come in this World but Satan spirit. And that Satan is always with Veronica even still now. It is also revealed by nun Death, That when she used to see satanic things before her. But she damaged her eyes after facing irritation. But she new later that human sight is not necessary to view such things. Before leaving, the nun informs Veronica that she is responsible for caring for and protecting her siblings.

Veronica draws protective symbols in all rooms after these occurrences in order to keep satanic spirit far. But it does not happen as such, that Satan burns all protective symbols easily. Then we also see with it, that spirit is choking Lucia’s throat to kill her. And Veronica attempts to save her.  As a result, Lucia is afraid and says that Veronica  is choking her throat not anyone else.

Veronica explains on it that Satan has actually arrived in our house and it was doing this. And she was just protecting Lucia from it. Veronica again dreams at the same night. She dreams that her sister is eating her biting with teeth and her brother Antonito is also choking her. And her mother is scolding her with it. And frightening all these, Veronica is awakened. Rising from her bed, she finds blood soaked bed. And there was black mark under the mattress . It was seeming, as that mattress has been burnt. While checking all mattresses of house, she finds the same burn mark on all. And it was appearing from that mark as someone has tried to burn it. And above all, that black mark was indicating a Satan. Antonito tells Veronica that his father came to  meet him at that night. And he said,

I will bring you with me!! Hearing it, Veronica  is afraid and relates to his brother, That there is no need to follow anyone. And closing eyes and ears, he should call Veronica so that she may come. Meanwhile, veronica meets nun death again and asks help to avoid these spirits. Nun tells her that they had left their seance incomplete at that day. Consequently, that Satan left behind here. They have to conduct seance so that Satan may send back. Then Veronica moves to Rosa’s house and asks her to conduct seance in order to send Satan back.

Rosa refuses to help. In this way, Veronica is left alone. Then she decides to conduct this seance with her siblings to get rid all these occurrences. And Veronica conducts seance with her siblings after fixing the spirit board . And Veronica asks Antonito to draw the protective symbols on the wall but he draws invocation symbol mistakenly. Conducting the seance, Veronica  asks Satan to leave this World. But that spirit refuses. She tries to get the Satan out from this World reading the different books. But he appears in complete figure before them attacking. Veronica  calls police in fear while Antonito is taken by Satan.

Veronica ‘s sisters Lucia and Irene runs out the house avoiding all these. While Veronica returns back to her house in search of Antinito. Then she knows that he is locked in her room. And she tries to communicate him. But Antinito does the same which was said by Veronica. Closing his eyes and ears, he is calling Veronica . Afterward,  Veronica  feels awkwardness in herself. But reality was this, Satan was neither in this world nor in the house but in Veronica . And a great secret is exposed here that Antinito was burnt in bathtub by Veronica . But she rescued her coming into her consciousness. Moreover, she was the same who was choking her sister’s throat. Coming into senses, she stopped all that. Otherwise,

Veronica was the cause of all occurrences at home. And the purpose of spirit was to possess Veronica. When Veronica comes to know that she is the root of all happenings, then she tries to cut her throat with the broken piece of glass. But she is stopped by that Satan. Police officers also arrive there during this situation. And police officers are left astonished seeing this occurrence. Because Veronica ‘s  body was in the air. Then she falls down losing her senses. Police officer brings Antornito and Veronica outside the house. And they take Veronica in ambulance. Detectives look at the fallen things in surroundings.

Then suddenly they notice Veronica ‘s photo in a frame which is burnt immediately. Then they get death news of Veronica. She is no more. After that detective makes a report taking this case. Here, he declares that the root of all these occurrences was the spirit. Who had come in our World because of the incomplete seance. What’s more surprising is that it was the first police case in which the spirit was mentioned.