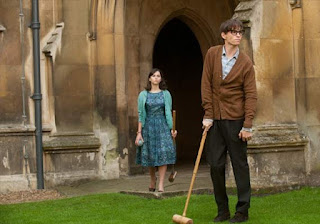 At the starting of movie, a family is shown where a man is seated on the wheel chair. In flash back, The time of 1963 in England in Cambridge is shown. And two boys are racing on bicycle. One of them has worn the optical glasses , he is actually main character named Stephen Hawking. Then they enter a party place where two ladies arrive.

A girl Jane is the second main character. As Stephen catches the sight of Jane, he talks to her going there and also says him ‘Hello’. Then Jane asks, Who are you? Stephen replies, ‘Cosmologist’. She asks, What is it? He replies, it is the category of religion for the bright atheist. Then that girl Jane asks, What is the worship of cosmologist? Stephen replies on it, One single unifying equation. It tells about every existed object in this World. Then Jane is nearly to leave and says before leaving, ‘Nice to meet you’. I hope you will get your equation. And she bids valediction. then a class comes on the  scene where the professor is talking with the students. Professor says, You are moving towards your Doctoral  journey. All seated students receive the question paper for solution given by professor. Afterward, all students leave that place.

Next day, Stephen wakes up in afternoon. Stephen’s  friend asks, How many questions have been solved by you? But Stephen has not viewed a single question. His friend asks, Stephen! Are you really want to get  Ph.D. Physics from the famous college of England. And he replies positively. Saying it, his friend leaves. Stephen gets up from his bed as his friend leaves. He plays music because he is music lover. And he starts reading the given question of professor. Suddenly, his hand is touched with the placed cup which is fallen down. Consequently, his some papers are spoiled. Professor takes the class again. All students are already seated there while Stephen is late.

He apologizes coming inside. Professor is checking the work of everyone. In his turn, Stephen hands over his work to professor which is solved on cards. Stephen says, I have solved only 9 questions. All are left surprised, his friend utters surprisingly, ‘9’.

Professors says, ‘Bravo’ after checking the solution of questions. Then Professor brings Stephan in a laboratory and informs that it is  the same place, Where J.J Thomson had discovered Electron and Rutherford had split the atom. And I am taking some graduates to London on the merit base in coming Friday. You can also come with me if you are interested. And they all will attend mathematician Roger Penrose Now it is shown that Stephen is seated alone outside the church where Jane visits. He invites Jane for lunch during conversation as she comes outside. Jane visits Stephen’s house where his whole family is there. Stephen’s father asks her, Are you studying now a days? Then she tells, I am studying Arts.

Then Stephen discusses with Jane, When did stars create? When will they be ended? They all emit Ultraviolet Radiation. If the Ultraviolet light was visible  in the sky then all stars would have disappeared. Stephen discusses with Jane about Science and she pleases. Then firework starts. And Stephen exclaims with joy, Wow! Looking at the balloons in the air, Jane says, There were only the existence of Heaven and unshaped Earth before everything.

And there was darkness. Climbing up the stairs, Stephen is stumbled when he is going with the boys at a place in next morning. But controlling himself, he moves to train. And professor is delivering lecture there. Stephen is attending this lecture attentively with a great thought. After the class, Stephen is staring at the coffee cup  and says, If black hole theory is applied on the Universe, What will happen? I am surprised on it. Next morning, Stephen discusses about it with Jane. If Einstein and general relativity theory are correct, It means this World is expanding. If you reverse time, this World will be shrunk. If I reverse the whole process for checking as what would have happened with the time itself.

Now Stephen is shown with the professor and is drawing something  on the blackboard relevant to the space time singularity. Stephen tells to professor, this World came into being with the explosion of blackhole. He comes outside. While walking, he stumbles and falls down hardly. Climax of Stephen story starts from here. Stephen is treated by a doctor. It is told that Stephen is facing ‘Motor Neuron Disease’. Doctor informs, it is infectious neurological disorder. It causes the damage of all brain cells which control the muscles activity of human beings as speaking, walking, swelling and breathing. It should be transferred from brain. But the muscles are gradually decayed losing their control completely.

And the survival time is only for 2 years. Hearing it, Stephen is speechless in fear and trouble. And Stephen asks fearfully, What do you say about brain? Doctor tells, there is no bad impact on brain. Your thoughts will remain same. Apologizing, doctor leaves him alone. Because it is a tragedy in Stephen’s life. Stephen’s friends and Jane come to know of his disease. Stephen begins to avoid everyone not meeting them. At last Jane visits him saying I want to live with you forever without any separation. Now Stephen walks supporting stick. He goes to classroom and smiles uttering the word, ‘Time’. Jane arranges a meeting with Stephen’s doctor who tells, Stephen has a short time for survival. But jane assures as they will fight together this disease.

In spite of knowing that Stephen will die, she  accepts him happily. And they are wedded. Stephen’s walking and talking face difficulty with the passage  of time. Because that neurological disease is badly affecting. But he continues to go to his University. Because he has to do something in his life. Now he holds two sticks. Professor welcome him with the knowledge he is intelligent, brilliant and extraordinary. This study is actually about the blackholes.  Stephen has presented the theory of blackhole. Professors call it extraordinary that is blackhole theory.

They ask, What is the next step? Stephen says on it, Next step is to prove it with single  equation as the time has a beginning. There is only simple elegant equation is required which will prove and explain everything. Stephen’s condition is begun to worsen as time passes. Now jane arranges a wheel chair for Stephen. Stephen encourages himself saying to Jane that it is temporary. Jane says on it, Of course! jane looks after Stephen. Jane is helping Stephen to wear jumper, Suddenly, she moves to her second kid. His jumper is caught on his head. And fire is burning in the front fireplace.

He catches the sight of fire through that jumper’s hole which breeds an idea in his mind. Next morning, Stephen is brought on the wheel chair to University by Jane. Where he delivers a lecture to many professors. He says, some particles avoid a blackhole. Blackholes are actually not black. Because they glow with the heat radiations. All professors are left astonished hearing it. Stephen tells, Firstly, star is disappeared into a blackhole.

And blackhole itself is also disappeared. A professors stands catching this idea and calls it nonsense. Some professors leave the room hearing Stephen. They take this idea useless. Another professor stands introducing himself. He says, Honestly speaking! I am here for hearing nonsense and also expecting it.

But I will say, Stephen has said accurate! All clap their hands warmly. Stephen is enough reputed for his theory as his book named ‘Hawking Radiation’ is published. Now it is shown that Jane spends time in depression because she is burdened. And she has to look after Hawking too much. Stephen’s father says, I have been supportive in your choice. But you need a care taker for your support at house. You will have to do it for your assistance. You have become well known throughout the World.

Stephen tells Jane that he has been invited in Bordeaux opera. Stephen leaves. He is honoured much and  sitting in a seminar , he coughs up blood. Stretcher is brought immediately to take Stephen to hospital. He goes in the prolonged unconsciousness. Doctor says, I don’t know, how will he survive his life? There will  have to create an opening in his neck for his betterment. It will be by passed through throat. But he will never be able to speak. Jane permits it saying that Stephen has to survive.

Stephen is operated but he cannot speak. Jane hires a care taker for Stephen’s care. Now the same care taker questions from Stephen using a  spelling board. So that he may respond blinking his eyes. Eventually, care taker gets understanding of Stephen. She tells Jane, he is brilliant and perfect patient. You are lucky one.

Now  the next wheel chair is arranged for Stephen. And it is told that it is height adjustable. It also scans alphabets. Using this technique, professor Hawking can write 4 words per minute. Another advantage is, it will convert the written words into speech. Now Stephen’s communication problem is  also resolved. He tells Jane, I will write a book named ‘Time’ through this system.

Now he asks questions from himself, What is the nature of time? Will it end any time? Can we reverse time? One day, all these question will be clarified before us .As the Earth is revolving around the Sun. Only the  time will reveal. Stephen remains busy and continues to write while clicking.  He writes, ‘A Brief History of Time’.

Then he says, I have been searching the Universe model for a long time. And I have eventually searched it. He also smiles in his crippled life because of his humorous nature. Stephen’s  another book ‘Brief History of Time’ is also published. Stephen is at the peak of success as a scientist.

All press reporters are gathered around his wheel chair. The care taker Allen is also there who looks him after. There is neither a boundary of Universe nor the human beings’ efforts. We have individual differences. If the life seems worst, there is always something which leads us towards success.

We can achieve success. While there is life, there is hope! Hearing it, the hall begins to echo with the clapping sound. Now the Stephen is with his family. And professor Stephen is called in an honourable way. Jane says to Stephen, congratulations!  It is really an extraordinary day.

Because he is with his family. The whole life of Professor Stephen Hawking  is shown in flash back. It is told in the end that 10 million copies of ‘Brief history of time’ sold throughout the World. Now 72 years old Stephen Hawking does not plan to retire. He is still in search of ‘Theory of everything’.