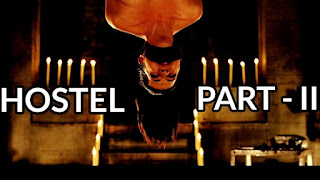 This movie is related to the previous film. So, for a better understanding, watch Part 1 of Hostel! Let’s start the movie explanation. The end of part 1 is shown as the movie starts. Where Paxton murders that businessman in the lavatory and sits in the train. His condition is worst at that time. Police officers hospitalize him finding him in such condition. Some people arrive there to meet him and collect all information about Slovakia. Paxton reveals everything  to them faced by him telling the mark of “Hunting club”. And that mark was bloodhound tattoo.

And that tattoo was made on the cards and the hands of members of that club. As Paxton tells everything to them, they shut the door of that room. And showing the made tattoo of bloodhound on their hand, they ask, Is this the same tattoo? Looking at it, Paxton is disturbed. And without giving him the chance to think, they murder him. But, as we can see, it is not reality, but Paxton’s nightmare. Paxton is still reeling from the pain of what happened to him, and he is living with his friend in the home of her grandmother. So no one may find him. Paxton did not want to expose anything to anyone. Because those people had a great approach. If he tells everything to police, they will kill him finding. He was leading life keeping this fear in his heart consequently his behaviour was odd. As a result, his beloved was anxious.

They controvert with each other and Paxton leaves from there. She is searching Paxton next morning. Moving into kitchen, she finds Paxton with detached head from his body. It means, his body was headless and his cat was eating it. Then we see the owner of hunting club Sasha who receives a box from a man. Sasha appreciates him. Then three American students Lorna, Whitney and Beth come on the scene. All three girls are attending their art class where they are sketching  a model Axelle. That model moves to them as their class is over. And she asks them to show her sketch.That sketch was neither perfect nor worst. But she still wanted to purchase it. On it, Beth gifts that sketch to her. Axelle offers her a drink on this. But she forbids saying I am in hurry. Because they had to catch a train for their travelling.

They all three are going to Spa for recreation and sit in the train. Beth and Whitney go in order to take a drink leaving Lorna in the cabin. When they come out of cabin, a strange man is  accidentally hit with them. But ignoring them, they move forward. They also meet Axelle there. They are surprised seeing her. Beth asks from Axelle, what is she doing here? On it, she says that as she hears you all are going to Spa so I also planned for it. On the other side, the same strange person is shown who had been gazing at Lorna for a long time from outside the cabin. And he enters in the cabin within a moment. As Beth and Whitney returns to cabin they find weeping Lorna. Lorna tells them, a man has gone stealing her ipad. At the same time, Axelle also reaches there returning their ipad. And she tells , a man had tried to rob her handbag , this was fallen from his pocket at that time. Hearing it,

they call her inside the cabin without any suspicion. While drinking, Axelle offers them to visit in Slovakia about which she considers a peaceful place. And they all were in search of comfort. And they wished to spend the vacation comfortably so agree. Reaching in Slovakia, they reserve a room in the same hotel. The receptionist invites them at a festival which is being held in night time. They all move to their rooms. Beth notices a joyful couple in the adjoined room. Then the receptionist is shown again scanning the passport three of them. After scanning,

he uploads their passport in an  auction website. Where the people throughout the World begin to bid them. Then a man named Todd buys Whitney and Beth on the high rate. This business was running at the uplevel. And no visitor was aware about their auction throughout the World. Todd invites his friend Stuart calling him. And at the first time, they were going to take this step. Reaching in Slovakia, they are dealt with respect. They join that festival  with Axelle at midnight. Todd and Stuart was also there and starring them. Because they had heavily charged for them. That festival was actually only the festival by name. In reality, The people had come there for their purchased tourists. Whitney tells Lorna that Beth’s dying mother had owned all his property to her. Even she herself gives money to her father.

she is as rich as she can purchase the whole Slovakia They all enjoy there but Lorna is sitting alone. suddenly, a man takes her for dance coming there. A boy also comes to Beth but she refuses. He says, I could help you! saying it , he leaves from there. As he leaves, receptionist offers a drink to Beth arriving there. Beth throws that drink at the back side where standing Stuart is noticing her. Apologizing him, Beth offers him a drink. As she goes to take it. Lorna comes saying, that man wants to take her at the boat. Beth refuses clearly on it. And she says, we should not rely on the strangers. And she goes to Stuart taking drink and they converse with each other. As Beth prepares to leave.

Stuart wishes Beth a good night! Beth then comes to a halt. Beth doubts as she did not tell her name in the whole conversation. Then Stuart tells her that I have heard your name from your friends. Trusting on him, Beth leaves from there. Further, she notices Lorna who was going with that man sitting in the boat. She tries to stop her but in vain. That man’s name is Roman who takes Lorna to a desolated place. Where some people intoxicate her leaving  unconscious. Beth and Whitney return to hostel while Axelle stays there for Lorna. Returning to their room, Beth sees the two person in their adjoining room who were winding up their luggage. Those men close the door seeing Beth. and it was the same room where she had observed a couple. Next morning, Beth and Whitney are enjoying much in the farm with Axelle. They think about Lorna as she will also be amusing with Roman. But Lorna was in trouble and hanging upside down on the bathtub. And in the split of seconds, laying in the bathtub, a woman injures the body of Lorona with a tool. Consequently, her blood flows down .

Taking bath from her blood. she cuts the throat of her. And she also takes bath in the left blood. Then we see Beth sleeping in the Spa. Waking up, she finds no one in her surroundings. she is alone there. As she goes to search Whitney, some guards approach there to seize her. Escaping from them, she climbs up a wall and jumps outside coming on the main road. Thee she meets the same boy who had asked her for dancing in the festival. Beth asks help from him but he is not ready and leaves. Beth runs into the forest where those criminal children beat her while surrounding. Meanwhile, Axelle with Sasha come and she takes Beth from there.

Sasha sets all children in a straight row saying them to throw a child ahead. Those children throw a boy ahead with no thought. Sasha shoots that boy. But this action does not leave any effect on the children. And they proceed normally from there. Then Axelle brings Beth into Sasha’s home. And there is grand and beautiful painting of Axelle. And here we get understanding as it is a deliberately taken plan. Because why did Axelle want to purchase that an ordinary painting from Beth inspite of having a grand and beautiful painting. On the other side, a make up artist is getting ready Whitney for the clients. Whitney escapes from there with a great difficulty. But CCTV cameras are fixed everywhere. And guards blocks all the door so she is failed to escape. coming into the room of Axelle

Beth sees the photo of same person who  had stealth the ipad of Lorna in train. There is also another photo of 2 girls named Natalia and Salvtlana which was in the part 1. Beth peeps through the window and notices the same guards who has come to catch her in Spa. Then she knows that Axelle is also the part of this trick. Locking herself in a wardroom, she finds a secret room where the heads of many people are placed as the trophy. Paxton’s head is also there among those heads. And coming there, guards also catch them. Further,

Todd and Stuart also approach at that location in a well formed condition. After refreshing , they move to their rooms. Coming into his room, stuart finds Beth there and gets worried. He tells Beth that he did not want to come here but has come on the insistence of his friend. He unties Beth freeing her. and Beth begins to escape. As she reaches at the door. He makes her senseless attacking at the back side and ties with the chair again. On the other side, Todd chooses a power cutter to mutilate Whitney. As  he rotates it on her head, it is hitched in her sculp.

And he disgusts looking at Whitney. So he goes leaving her in this condition. But the contract of that clubs included that no one could depart without killing her. Todd breaks the law. As a punishment. they leave their hounds on him which eats him while tearing. Afterward,  Whitney is treated medically and captured photo of her is shown to all clients. They were selling her to their clients on the low rate. They also visit to Stuart with this offer. When he knows about the friendship of her with Beth, he agrees. Killing Whitney, he puts on her necklace to Beth. Beth starts seducing him in order to save her life. He lays her on the table freeing.

As he comes to Beth, she gashes her while attacking and ties on the same chair. At the same time, security guards reach there but showing the gun, she threatens that she will cut Stuart. Then she demands Sasha .Reaching there, Sasha orders to kill both of them. As  being aristocratic, she offers a deal. She was ready to give the demanded payment to them. Then he tells the rule of this place as  one has to kill anyone to be the member of it. Then Beth thinks nothing and leaves him dying after cutting the some parts of his body. After that, carving the same bloodhound tattoo on her, she becomes the member of that place. Beth transports Axelle into the forest with the help of those children. And she detaches her head from the body, the children play football with her head. And movie ends here.