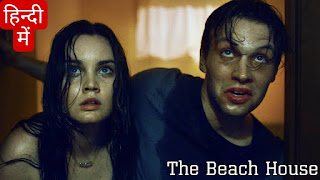 As the movie begins, we are shown the depths of the Sea, where the earth gases are being released. In the next scene, we are shown a young couple. The girl’s name is ”Emily” and the boy’s name is ”Randall”. They have come to Randall’s parent’s beach cottage to spend their vacations.

There are also many houses near this house but these are all empty. Because they were all vacation homes Just like ”Emily” and ”Randall” came here. In the same way, the rest of the people will come to these houses. and when many people come to the same place, that place would look like a town. But now it was just “Emily” and “Randall.” And then, ”Emily” goes to the washroom. She notices that the water there, is not like natural water but it’s different. She also feels this thing strange that a cabin was full of medicines there. This thing was so weird because that house was empty since ages. No one lived there. Then she goes to the kitchen. Seeing its condition, she gets shocked. Because it seemed that someone is living here. When ”Emily” is checking out the whole house, suddenly,

a lady runs into her house. ”Emily” gets scared and hide ”Emily” secretly watches them and goes upstairs to call ”Randall”. But that lady goes away after hearing her steps sound. Before ”Randall” could reach there, she disappeared. They check the whole house. They see that that lady has hidden there. ”Randall” asks what she’s doing in their house? On which that lady expresses that it’s her house. Her husband also arrives there. And here it turns out that their name is ”Mitch” and ”Jane”. They are very old friends of Randall’s father. He tells Randall that we are living here by the will of his father. She becomes very upset to hear that her vacation has been ruined. She says they will both rent a room and he invites them both to dinner at their own house. ”Randall” doesn’t mind, but ”Emily” doesn’t look happy. She goes outside and sits down, then she sees a slug who seemed so lazy.

It looked like it had a disease. Then at night, they all have dinner and at dinner. There are oysters also that ”Jane” brought. Everyone eats oysters except ”Emily”. ”Emily” tells them that she’s interested in studying ‘AstroBiology’. She tells that life is so unwell and we have a deep combination with element rights. It includes temperature and distance from the sun. If anything moves from its place, humans will vanish.

We will vanish and this earth will only be left with dust and gases. They don’t understand ”Emily” but still they are enjoying her talks because they like it. Meanwhile, their drink ends too. ”Randall” offers them ”Arowana fish”, eating it they become full. ”Mitch” notices that the texture of the water is strange too. but he ignores this. Then these people are standing in a gallery and notices something really strange. Many microbes are floating in the air. In fact, they are in water and it was strange to see them in the air. ‘Jjane” insists to watch them by going near so mitch permits her.

She notices that microbes are frozen everywhere. and she touches them. as she touches them, she starts coughing. This didn’t happen to her because of microbes. there was fog and it was difficult for her to breathe. She gets faint. Even after a long time, when ”Jane” does not return, ”Mitch” goes to find her. On the other hand, ”Randall” is unaware of everything under the effect of Alcohol. ”Emily” sees fog entering the house. She closes the door but also falls a prey to this fog. She gets faint too.

”Emily” wakes up in the middle of the night and she sees that ”Jane” is coughing. She goes to her room to see her. When ”Mitch” sees her, he closes and locks the door. ”Emily” and ”Randall” both go to their room to sleep. When they both wake up in the morning, they feel severe headaches. They decide to go to the beach. When they come down to set out, they see ”Jane” who was sitting quietly. She wasn’t answering them. When ”Emily” goes close to her, she sees that she has finished her all medicines. She gets closer and sees that her skin is peeling off. They both go outside to find ”Mitch”. While finding him, they sit near the beach. There,

”Randall” feels unwell and he rushes toward his room. In a hurry, he forgets his cell phone and keys there. As soon as ”Randall” leaves, ”Mitch” also reaches there. He knows everything about Jane’s present condition. On the other hand, ”Randall” notices that the texture, color, and smell of the water was totally changed. He ignores this and he starts going to ”Emily” again. Suddenly, he hears a voice from the roof. ”Randall” thinks that ”Mitch” is there. He goes upside to find him. But ”Mitch” was with ”Emily”.

He tells her that this place is strange. Then he goes swimming. After going some forward in the sea, he disappears. ”Emily” runs forward. His foot lands on a jellyfish. It bites ”Emily”. ”Emily” sees that a worm is moving in her wound. When she looks around, she sees that the same jellyfish is spread around the sea. She rushes home and pulls out this insect with an instrument. Then she notices that it isn’t a worm but a tentacle of that jellyfish. Which has turned into a worm after being mutant. After that, she bandages her feet. She changes her clothes and tries to escape from there. Only then, ”Randall” comes to her by crawling. She sees that her condition has become worse too. ”Jane” did this to him who was not a human anymore but a zombie now. They try to escape from ”Jane” but she doesn’t let them go at any cost.

They go to a nearby house for help but they don’t get any response. ”Emily” asks ”Randall” that how did ”Jane” did this to him but he didn’t remember anything. They didn’t have keys to escape because they left these on the beach. Then they notice a crawling man like ”Jane” who was coming closer to them. They run from there. Night falls and fog too. They continuously walk on a road and Randal’s condition worsens. Then ”Emily” finds a police car with having a radio. She seeks help by conveying her message through it.

She gets a reply too. Someone says that it is extremely dangerous. On which she asks that are you talking about fog? He replies with ”No”, it isn’t fog. And their connection disconnects. She hides in a house to save herself from the fog. ”Emily” notices that the water isn’t the same as before. It was completely changed. On a TV, they get to know that this isn’t happening to only them but it is happening in the whole country. Microbes are the cause of this all.

These Microbes are present underwater. But these have come to its surface due to immense heat on earth and are releasing in a large number. These are killing human’s current life form and generating a new life form. Their purpose is to kill humans. ”Emily” finds car keys because they had to run from there. She goes to a basement where she finds oxygen cylinders. With the help of these cylinders, she could get rid of this fog. But now it was too late. ”Randall” vomits and a strange creature comes out. He also becomes a zombie gradually.

In the basement, ”Emily” sees an extreme mutant man. He was eating the other man too. ”Emily” picks up this cylinder immediately and runs towards the top. She sees that ”Randall” is also totally changed. She had no other choice to save her life. So, she crushes ”Randall” with this cylinder and kills him. Meanwhile, she finds the keys too. She rushes towards her car but there was so dust and fog. She couldn’t see anything but moves forward by the estimate. Suddenly, Emily’s car hits a tree. Here we notice that some symptoms of that creature could be seen in ”Emily” too.

Then we are shown the next morning and ”Emily” is on the beach. She was fully infected. She kept saying, ”Don’t be afraid”. Suddenly a huge wave of water comes and takes her with it. In fact, in the movie, Emily’s predictions, what she made, proved right. That if these rights fluctuated, we’ll vanish. One day this will happen and this happened because of the immense heat on the earth. There were many microbes in the rocks in the depth of the sea that spread on the sea and was spreading devastation. The movie ends here.