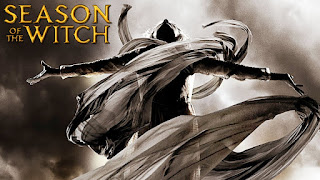 There was a time when women faced a lot of adversity. Women were accused in a variety of ways during that time period. The biggest accuse was of Black Magic. Whoever was accused of this, was sentenced to death only.

Then we are shown the year 1235. A scene of Villach city, in which three women were accused of black magic. They were found guilty and sentenced to death by the church. Father says to them before hanging them that if any of these three admits her sin, she will be forgiven. Upon hearing this,

a woman confesses her sin. She says that I tried to do black magic and worshiped the devil. The other woman was really innocent. She says I didn’t do any black magic. She says that I make medicine to eliminate the effect of it. The third horrible faced woman doesn’t confess her sins and curses the father. All three are hanged from a bridge. These two women begged for their lives, but in that era, the only punishment for black magic was death. After the execution, the soldiers hang their bodies in the water. And they leave, but Father stops them and he says we can’t leave their bodies here like that. And we have to eliminate the effects of black magic. For which they will have to say a few words from the book Solomon on their bodies.

Otherwise, the result may be so bad. But the soldiers did not believe them. They listened to Father and left. In the middle of the night, Father comes to the stream with the Solomon book and one by one pulls out the bodies of these women. Then he speaks some words on their bodies which is called ”Mantar” (religious words). The devil comes out of the bodies of the two, but the third woman comes to life. But she had become a horrible witch. She hangs Father with that bridge and kills him. After many years, the thirteenth century is shown. Wars had begun in that era. Million of people participate in the war on behalf of the Church. The bravest of all were two soldiers who participated in every war bravely. They both are friends and care about each other. One of them is named ”Felson” and the other is named ”Behman”.

They joined the church and showed great courage and proved loyalty. Then they attacked here in the year 1544. They had a war with them and they killed people in a large number. But soon they found out in the war that there were no soldiers fighting against them but women and children. And they get to know this when the sword of ”Behman” penetrates into the belly of a woman. They become upset to see the bodies of women and children around. They blame their leader for this. And they say that we did not join the war to kill these innocent people. We will not oppress them. Hearing this decision, they both revolt. They leave their army and return to their country. They did not follow the Church’s decision, so they became rebels. But they have to hide because Christianity was on the rise and their laws were so strict. In which rebellion, betrayal, and non-compliance were punishable by death. They pass through ”Styria”. They see a house in the forest where they go for help. But going there, they got amazed that the couple living in this house died of a serious illness. Their dead bodies became badly rotten. The atmosphere of ”Styria” looked very strange to them because the people there look very disappointed.

They were not burying the bodies but collecting them in one place. Some of them were praying for mercy but at the same time, they were hurting themselves. Because ”Felson” and ”Behman” had just arrived, they had no idea what was going on. Then a soldier tells them that a dangerous disease has spread here. In which people’s body begins to rot. This disease is on rise for last 3 years. He says that my whole family has died of this disease. They came here to collect something for their help. But his sword catches the eye of a soldier and they recognize it. As they are about to leave that place, their soldiers grab them. They present them to the king. He’s also suffering from this disease. The King knows about ”Felson” and ”Behman” that they are very brave soldiers. But now they have revolted. The king says that the disease has come from hell. Which a woman has brought into this world and we have imprisoned her. He says that its cure is only in Solomon’s book. That book is in Zevric and we have to bring those witches to Zevric.

Their leaders will decide what to do with them. But our soldiers can’t do this because it has an immediate effect on our soldiers. He offers him that if you do this, Church will forgive all of your sins. But ”Behman” refuses to do this because he still regretted the last battle. Their refusal angers the king and he puts them both in a prison. But there is also that witch in this prison. The girl did not look like a witch. But ”Behman” feels sorry for her when she was shivering in the middle of the night because of her injuries and weeping. But he feels sorry for her and says yes to the king. That they will take them to Zevric. And it will take six or seven days to get to Zevric from here. They are accompanied by their father and a soldier.

They have no idea about the place, just a map. “Behman” is not reliant on a map. He requires the assistance of someone who has been there before. A merchant helps him with his demand. He went there nine years ago. He knew the whole way. There are five of them and they are taking the witch in a cage. This girl did not look like a witch to anyone except Father. Because he knew that she was a witch. A local boy is chasing them because he wanted to go there too. He tells ”Behman” that when your mission is completed, make me your soldier too. They don’t agree to take him there. Then ”Felson” tests his swordsmanship, in which he is an expert. Seeing this, ”Behman” gets ready to take him with him. Night has fallen. And they take turns guarding the witch. The first guarding turn is of ”Eckhart”. Then he tells Father, the story of his dead daughter. The witch hears all this and she looks like her own daughter to him. He goes to set her free when she pulls him out of the bars and grabs him.

The father goes to save him, but the witch also injures him. He has a key of cage tied around her neck, she pulls it and runs away. After all this, ”Felson” and ”Behman” also get up. They come to them but by then the witch would have run away. She hides in a village near this place. Everyone goes after her to catch her, but no one can control her. Because she was disappearing again and again. Then ”Eckhart” sees her dead daughter. The girl is in very bad condition and is calling for help. She isn’t his daughter but that witch was giving him visions. It all seems true to him, he runs after these voices. But there a boy was standing with the sword who came with them. ”Eckhart” couldn’t see him and the sword pierced his belly.

At which ”Kay” wonders why ”Eckhart” did not stop?. Because the witch was showing him fake visions. ”Eckhart” was going to set him free but she kills him. After her death, they imprison the girl again. She begs them to let her go, but she is locked up in the cage again. Father explains that they should not reveal anything in their heart. Because witch can use this against us. She can show us strange illusions and she can make us fight each other. During the journey, there comes a deep gorge between the two mountains. There was a very old bridge made of ropes on the way to cross it. But it was too weak. They have a cage made of heavy rods on the back of the horse, in which that witch was imprisoned. But it was very difficult to cross this place with luggage.

They cross the bridge one by one and at last, they take the cart. They have a hard time doing all this. And then this bridge breaks down too. Then they enter a deep forest. That forest was considered the most dangerous forest. Whoever came there could not escape. There was a lot of fog. They stay in this forest to spend the night. They saw no way out. And the merchant could not sleep all night because whenever he tried to sleep he had nightmares. It was all done by that witch. And when the merchant could not bear the inconvenience, he takes his bow and tries to kill the witch. On which, ”Behman” stops him. After wandering in the forest for many days when they can’t find a way, ”Behman” gets angry. He gets angry and decides to kill the witch. On which, Father stops him. Then ”Felson” tells ”Behman” that we have found our destination at the top of the mountain. Zevric is there. Reaching there, they knock on the door many times. But no one listens to them. After much wait, when no one opens the door, ”Kay” crosses the wall and opens the door from the inside. That place was quite silent and then they enter the ”Church”.

The scene there was so horrible. Father weeps a lot to see everything. Because they all had fallen prey to that disease. Everyone died of it. Then they think about how Satan can influence such a place? They die in the same condition. They were writing a book. Then Father exposes that they were making a copy of Solomon’s book. The original book is the only one they have. It had many religious or magical words to eliminate its effect. These people have high hopes for coming here. On which ”Behman” says that this is our last hope. Says that those people died, they were so unlucky. But only you can make us free from this situation. Then Priest opens this book and starts reading out the religious words. But this doesn’t affect that witch. Witch’s voice becomes similar to men. She exposes every bad habit of ”Behman”.

A demonic soul is residing in that witch. All secrets are revealed here. Father understands immediately that she isn’t a witch but a demonic soul has controlled her who came from hell. He has spread that disease and now he wants to get out of hell and come to this world. Father’s prediction was accurate, he starts speaking magical words loudly. Which immediately begins to affect the devil. And then his true evil form is revealed to all, who is horrible. He melts the bars and flies away. but ”Kay” doesn’t stop reading magical words. As soon as ”Mantar” (magical words) over, a spark comes inside Devil. The fire grows and spreads and takes him back to hell. He also exits the girl’s body. Behman’s sacrifice saves many lives Because his prayer was answered, his sins are also forgiven. ”Kay” buries the three and takes the girl away. The dangerous disease has vanished as well. The film also comes to an end here.