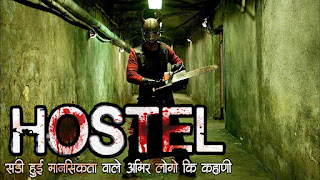 Two college students are shown at the start of the film. “Paxton” is one, and “Josh” is another. Both of them have actually come to visit in Europe. In Iceland, they find their friend ‘’Oli’. They go to Amsterdam together. They return to their hostel late at night after leaving a nightclub. The door was closed and nobody was opening it so,

forcibly they have to stop outside. In the same time, their neighbour named ‘’Alex’’ calls them in his flat and they go in there. Alex advises them to go to a hostel in ‘Slovakia’ where they will find a lot of girls. And they already came from America to Europe for luxury. Listening to him, they set out for Slovakia on the train the very next day. On this train, they meet a businessman. While he was eating,

his hands were shaking a lot. Seeing this, they get amazed because this man seemed strange to them. Then they start talking to each other. While talking, the man puts his hand on Josh’s leg which makes ‘’Josh’’ very angry. He cries at him and that man leaves from there. In a short while, they reach their destination that is ‘’Slovakia’’. As they reach the station, they see that there is no one except them and the station is vacant. And they go to the same hostel and they see girls everywhere.

Seeing them, they become very happy. After that, they go to their room and there they meet ”Natalya” and ”Svetlana” in their room. And both of those girls invite them to go spa. They become agree and go to the spa behind them. After that, the girls take them to the dance club. They have a lot of fun, and then “Josh” comes out of the club to get some fresh air. Then the criminal children of this community surround them and demand money withdrawal. Then the same businessman comes there and throws the money in front of them. Those children run away with the money. ”Josh” thanks him and offers him a drink and excuses for his behavior on the train He says to ”Josh” that this is what you should do as old as you are and all you to have to do is bear your anger. What else could he do? Oli, on the other hand, takes a girl on reception,

somewhere with him. When they wake up in the morning, they are both very happy. They had had more luxury than they expected. But they couldn’t find ”Oli” anywhere. They try calling him but his mobile wasn’t responding. The receptionist tells them that, ”Oli” has checked out in the morning but this was totally out of their understanding. Then,a Japanese girl named ”Kana” comes to them and shows Oli’s and her friend’s picture on mobile. She tells them that my friend sent me this picture in the morning and ”Yuki” is also missing. After some time, they receive a picture from Oli’s number with the message ”I go Home” on it. But the reality was different, someone separated Oli’s head from his body. As well, he was torturing Yuki too.

On the other side, ”Paxton” and ”Josh” plans to escape from there with ”Kana”. This is when “Natalya” and “Svetlana” arrive. They ask them to go to dancing club Josh had no mood to go anywhere but Paxton still wanted to enjoy. So, he makes ”Josh” agree too. In Club, these girls feed them something. Due to which, Josh’s physical condition worsens and he come back to the hostel. As soon as he reaches his room,

he becomes unconscious. Also feeling sick, Paxton goes to the storeroom instead of the bathroom and its door closes and he ends up locked in it. When he regains consciousness, he could hardly see. He sees that someone has locked him in a room and many instruments are around him. Firstly, someone takes off his mask and makes two holes in his chest with drill. He was none other than that Businessman. He tells ”Josh” that he always wanted to be a surgeon. But he never became because his hands always shivered. ”Josh” requests him to show mercy but he cuts his feet from back and opens the door of frontal room. He unties Josh’s hands and feet and says that, he’s free now, he can go.

”Josh” tries to run from there immediately but he wasn’t able to run due to mutilated feet. He falls off and try to escape by crawling. But that man kills him by cutting his throat. Paxton wakes up too and returns to the hostel and learns that he had supposedly checked out. Hearing this, he gets shocked because he had not made any check out. He asks for a new room on rent and he’s given a new room. He asks about ”Kana” on which receptionist replies that, she also has gone in the morning. Paxton comes to his room and same things start happening to him.

As he comes to the room, he meets two girls who invited him to go to the spa. Everything seems strange to him and he also gets amazed. He tries calling ”Josh” but of no use because his cell phone was switched off. After it, he goes to the Police Station and files a report but they also refuse to help him. He comes back to Hostel and asks ”Natalya and ”Svetlana” about ”Josh”. At first, they dodge him by talking here and there but when he gets angry, they tell him that they saw ”Josh” in an Art Exhibition. ”Natalya” takes ”Paxton” tho an Old Factory, where many rich people and their guards are present. When they get in, they see that, that man had mutipulated Josh’s body brutally. He was performing some kind of Surgical operation on him. Before he could do anything, security guards come and take him out of there. ”Paxton” sees all around where people are being tortured and everyone is crying. They tie ”Paxton” in the same room and ask him to speak something. As soon as, he speaks, guard says that,

He’s an American and leaves. After this, a man starts torturing him and cuts his two fingers with Chainsaw. Due to which, his handcuffs breaks. He moves forward but his foot slips and falls down. His own foot gets cut with this Chainsaw. ”Paxton” sets himself free immediately, takes out a gun, and kills him by shooting. Soon, security guard come there but ”Paxton” shows him that, he is still tied. As soon as he gets the chance, he kills that guard too and bullets get finished. He reaches another room by running. He sees dead bodies everywhere. Suddenly, someone comes there so, he hides in those deadbodies. That man was taking these deadbodies to put somewhere else.

There, ”Paxton” finds Josh’s deadbody too. Somehow, he maintain his senses and kills that man too. He escapes from there and by using elevator, he comes to the first floor. There, he hides in a room and finds some good clothes there and tries them on. He finds a card in pocket of a dress, which contained address of that place and name which was ”Elite Hunting”. Behind that card, different rates of people from different countries were mentioned. American people had the highest rate.

”Paxton” was reading everything, when a man comes but he considers ”Paxton” as a client. He tells that he found a Japanese girl and he has planned many things about her. Here, he’s talking about ”Kana”. As soon as he goes, ”Pixton” takes his gun and runs outside. He sees a car with its keys in it. While, he was sitting in the car, he hears ”Kana” screaming. He goes in to rescue her immediately. As, he goes in the room he sees the same man who is now burning her face with Blow Torch. He kills that man too. ”Kana” was in a lot of pain because half of her eye was out. To save her life, ”Paxton” cuts off her eye from her body. This creates a lot of disturbance. A very disturbing scene. Somehow, they come outside by saving their lives with great difficulty and flee in a car, pursued by guards. While driving, Paxton runs over Natalya, Svetlana, and Alex, he kills them by hitting with car. ”Paxton” wanted to go to Station but on the way, police was checking.

Police was with them. A police officer sees ”Paxton” in a car and as soon as he heads toward him, they leave the car and run away. They walk by foot and at last, reach the station but they see many people in search of them there. There, in mirror. ”Kana” sees her face and gets disheartened. She attempts suicide by jumping in front of a coming train. Seeing this incident, many people gather there. ”Paxton” finds a way to escape and availing the chance, he gets on the train and train starts moving. On this train, he hears the voice of the same businessman. On which station this man stops, Paxton follows him there. He was with his daughter. They both use separate toilets. That man waits for her daughter for a long time outside the bathroom. When she doesn’t come out,

she goes inside and sees that she wasn’t there. Only her toy was there. He randomly finds his daughter but finds her nowhere. On the other side, ”Paxton”’kidnaps his daughter and take her with him on the train. That man keeps searching for his daughter. The club, which is shown in this movie is a club where rich people make people from different countries, their prey to vent their anger and frustration and kill them. People from various countries have varying rates. American people carry the highest rate because they hate them a lot. They have been doing this business for a long time ago and police was also with them. They provide girls to the visitants and kills them. Movie ends here.