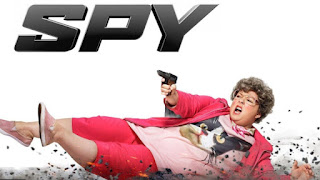 The story of Spy film begins with a character named Bradley Fine who is the field agent of CIA. Coming from the party, he reaches a place taking a gun where an arms dealer is present. He says going there, Where is the bomb? You have only 10 seconds! Bradley’s gun is suddenly disposed, killing that man. Meanwhile,

another character named Susan Cooper appears who is 40 years old lady. She is a CIA analyst. She remains in contact with Bradley through the earpiece Bluetooth. In the next scene, the CIA boss provides the weapons’ information along with others. Then she displays a picture of a girl named Rayna on a screen. She tells about Rayna. She is a top class girl! She has been living in London for the last 10 years. And she is in contact with the other terrorist organizations’ Heads. Then a man Solsa Dudaev’s photo is also shown who is al-Qaeda funded. She says We have evidence that he has machinery. The assigned mission for Bradley is to bring Rayna here. Going to his mission, Bradley reaches Rayna’s house while Susan sitting in the spy office is noticing everything. She keeps an eye on each action of Bradley. She continues to provide him guidance and instructions. Security guards attack him as he enters the room, Rayna. But Bradley cracks their necks. Then Rayna enters the room and talks to him pointing Bradley on the gun point. As she says, She knows that his name is Bradley Fine! And he has devoted as a CIA agent. Then she names the other agents as Mathew, Cris Rick Ford and Karen Walker. Then she says, I know all your active agents! I prefer you to keep yourself away from me! Then she shoots Bradley. Being helpless, Susan Cooper is just watching him online sitting in her office because she cannot act in any way.

She takes a photo of a chit putting aside. Then she sends that photo to an employee of CIA named Nancy saying her to enhance it. Enhancing that chit photo, it clears the number with the written word’ Paris’. CIA boss arranges a meeting with all her employees. She says Rayna will have hacked the whole system! She is Rayna who is nearly to sell the tactical weapon to a terrorist organization. Then CIA boss declares, We don’t know that where is that bomb? Our analyst Susan Cooper has understood the way! Rayna has the contact of De Luca who is working with the terrorist group. Then detective is decided for De Luca and Rayna. It is also decided that the detective will be disguised. But Ford disagrees on this assigned task to Susan Cooper considering her incompetent. He is the other agent of the CIA. Interviewing Susan Cooper, the CIA boss directs her on her work. She declares this task as a track and report mission. She is given a fake identity of a mother named Karel who is the mother of 4 kids. CIA boss says You cannot contact me directly, your task is only to track and report! Terrorists can possess the Nuclear Bomb in case of a minute mistake. Some weapons such as whistle, anti-fungal, and paper spray are given to Susan Cooper from the spy team. She is also instructed. Spy employee says,

It is the best thing if you sacrifice your life for the sake of your country! Susan replies, I am not sacrificing myself but returning back. She departs to Paris by aircraft disguising herself into a new look. She is afraid and also excited. Then she reaches a hotel” Motel”. Ford is already in the room as she enters there. He again reminds her, You are just spoiling the whole mission! The next morning, Susan leaves to search the office of De Luca. When she shows up at the tower’s location, she notices his scorched office.

Then a man there shows her a photo of the construction after it has been demolished. In addition, there is a suspect in the picture. As he wants to enter a hotel, she notices this same accused man outside. She is pursuing him while he is pursuing Ford. The man then walks away, substituting his bomb bag with Ford’s rucksack. Susan shouts at Ford but he does not listen. Going in the crowd where the concert is being held. Holding a mike on the stage, she informs Ford about the bag. Ford finds a bomb opening the bag. Ford throws the bag into a lake situated at the back side which causes a great explosion. The people start running to save their lives. People are secured and Susan runs after that suspected man who takes her photo. She remains in contact with Nancy and tells her friend, I am pursuing him! She enters a building chasing him. She kills him and that man is fallen down from the building. CIA boss orders Susan through a call to come back. But Susan assures her, I can accomplish this task and I have rescued many people. Then CIA boss is again satisfied and gives her a new name Penny Morgan changing her identity.

Now the new identity of Penny Morgan is of divorced housewife and moves to complete her mission again. With her new identity, Susan goes to Rome where De Luca’s presence is detected. There he meets a man named Aldo. Aldo reveals that the whole night is spent in Casino by De Luca. She tries to enter the Casino but the checker says to her, Your name is unlisted! Ford is also there and declares her a partner. Bringing her aside, Fort gets furious and says, Why is she here? Then Susan also observes Rayna who is in the Casino. Then she notices a man mixing something in the drink of Rayna. This action is in her favor because she could take revenge as such. Because she is the killer of Bradley Fine. She thinks the secret of the bomb will be lost if she dies. Susan saves the life of Rayna telling that there is something that has been mixed in her drink. Rayna becomes friendly with her. She invites her into the inner circle of her team saying, we are leaving for Budapest.

Rayna takes her in her private jet and reveals her, “This is my father’s jet.” Rayna says You are the one who brings the memory of my mama in my mind. She offers Susan a drink which makes her senseless. Coming into the sense, Susan knows that Rayna had mixed drugs in her drink. It is revealed to Rayna that Susan is a CIA agent. Rayna is again attacked in the jet killing the pilot. And the aircraft begins to crash. Then going to the cockpit, Susan balances the aircraft saving it. She also saves the life of Rayna. Telling a lie, Susan changes her identity again and convinces Rayna. She tells Rayna, My name is Amber valentine. I have been hired as your private bodyguard by your father. Rayna agrees of her being a bodyguard but threatening as you will face the unexpected death if telling a lie. Now Susan reaches Budapest with Rayna. She is calling a CIA employee named Nancy while walking on the road. Suddenly,

she is bumped with a lady who is the same employee Nancy. Susan is shocked to see her. Nancy tells I have been sent here searching for you through the help of your earpiece device. Rayna immediately comes after them noticing them together. Rayna is attacked there as she arrives. Saving the life of Rayna, Susan gives her charge to Nancy. She goes after that attacker who is driving a car. Susan chases that car snatching the scooter of a man. She reaches thereafter great trouble. Looking into the car, she finds a spy  Karen walker. Karen Walker is a traitor who has sold the names of CIA agents to Rayna. Before attacking Susan, Karen is murdered by someone. Susan is seen in a new look in the next scene. Then she attends a party with Rayna. Rayna says to Susan, I had asked you to dress up nicely and take off your gloves! Rayna asks Susan to keep an eye on a girl showing a photo on her mobile.

Ford is also there disguisedly. Both quarrel but that girl arrives there which was asked to notice. Susan catches that girl going after her. That girl loses her consciousness because of Susan ‘s attack. It is all outside the party. After sometimes, Rayna comes to that place where Susan is captivated and Bradley Fine also arrives there. This scene exposes that Bradley is not murdered by Rayna. He is still alive. Susan is surprising but Rayna’s  security makes her unconscious. Susan becomes the Captiva of Rayna. Aldo is also imprisoned. Bradley tells the whole reality coming to the place where Susan is bound. He says I had to make my death fake in order to win the trust of Rayna. Karen Walker had sold the agents’ name to her so she is aware of our agents. I am undercover even before you and cannot trust any member of the agency. Rayna does not know your identity as a spy. Now I am going to meet De Luca and Solsa Dudaev to know about the bomb. Saying it, Bradley Fine leaves.

Susan and Aldo escape from there after him. Susan Cooper follows Bradley Fine who is on his mission related to De Luca. Susan Cooper goes into a De Luca villa taking a new car. Rayna and Bradley had been welcomed in the villa by De Luca. But he suspects Bradley knowing that he has been the agent of the CIA. He points his gun on him after a suspicion Taking a gun, Susan reaches there. And she tells them I am CIA agent Susan when De Luca asks about her identity. She tells them She has been mistreated by the CIA. She is here to save the life of Bradley because she cares for him. She convinces others with her conversation winning their trust. She accepts, that she can do anything to rescue the life of Bradley. DeLuca says, All right! I accept your offer! But in case of misdoing on you or your partner, I will kill both of you. Solsa Dudaev is welcomed by De Luca after his arrival. He also takes information about the package.

De Luca hands over him the briefcase of a diamond. Rayna takes them inside and shows them the nuclear bomb device. Taking the sight of Nuclear bomb  device, De Luca points Solsa Dudaev at the gunpoint and finally shoots him. He orders his security guard to place the  Nuclear bomb device and a briefcase filled with diamonds in the helicopter. He wants to sell the diamonds to the buyer.

Now Rayna is the shooting point of De Luca’s gun. Ford comes there weirdly as he is about to shoot Rayna. Ford attracts the attention of everyone. Finding the chance, Susan ends the men firing her gun. De Luca is nearly to shoot Susa Cooper but Bradley comes before her receiving the gunshot on his arm. Susan loses her temper and catches De Luca. De Luca immediately takes his helicopter where the diamonds and device have been placed. Susan Cooper comes at the specific time of the drone’s flight. She catches the helicopter’s tail section while hanging on to that one. Then she receives into the helicopter. She throws the gadget and the diamond rings into the lake. De Luca has become violent as a consequence of this.

Nancy in the other helicopter utilizes her gun to attack him as he gets ready to fire his gun on Susan, he himself is a casualty of the Susan controls the helicopter landing technically. A nuclear bomb device is taken out from the water while Rayna is seized. CIA boss and other officers also reach there appreciating Susan.